English version / About the company / Management / 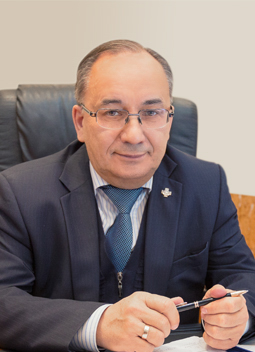 Born on the 9th of April 1951 in the town of Kamyshin, Volgograd region. In 1973 graduated from Perm Technical Institute with distinction with a degree of a mechanical engineer in Aero Engines.

In May 1983 appointed a Chief Designer – Senior Deputy of the Engine Design Bureau Director by the order of the Minister of Aviation Industry of the USSR.

In August 1989 appointed a Chief Designer of the Engine Design Bureau in charge of the PS-90A engine.

Since October 1995 — Senior Deputy of the General Designer at Aviadvigatel.

In September 1997 appointed a General Designer of Aviadvigatel.

In 1999 Alexander Inozemtsev was conferred a degree of the Doctor of Technical Science. Since 2000 he is heading the Aero Engines Department of Perm State Technical University.

On the 28th of June 2001 appointed a General Director – General Designer of Aviadvigatel.

Since 2003 thru 2009 Alexander Inozemtsev was at the same time a General Director of Perm Motors Group Managing Company which was assigned the powers of the sole executive body of Aviadvigatel, Perm Engine Company, Reductor-PM, Metallist-PM, Energetik-PM, Instrumental Plant-PM, Remos-PM, Caskad-PM, Zheleznodorozhnik-PM, etc.

In 2008 he was conferred the degree of the Professor of the Aero Engines Department of Perm State Technical University.

Laureate of the RF State prize in science and engineering in 2000, Laureate of A.N. Kosygin’s prize in 2006, Laureate of the RF Government prize in science and engineering in 2013, Laureate of Perm region prize in science in 2013, Honorary citizen of the city of Perm. Awarded a second-class Medal of the Order of Merit to the Motherland, Order of Honor, award pin “Expert of Air Transport”, award pin “Honorable Aviation Engineer”, memorial sign “Perm region emblem”,  governmental and industry agencies’ certificates of appreciation. Academician of the Russian Academy of Aviation and Aeronautic Science, Correspondent Member of the Academy  of Technological Science of the Russian Federation.